The Ram and the He- Goat - PowerPoint PPT Presentation 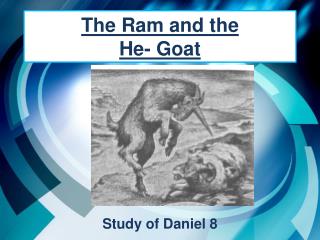 The Ram and the He- Goat The Ram and the He- Goat. Study of Daniel 8. Daniel 8:1. “In the third year of the reign of King Belshazzar a vision appeared to me-to me, Daniel-after the one that appeared to me the first time.”. Daniel’s Second Vision. Daniel 8:2.

The Ram and the He- Goat

DANIEL SEMINAR - . battle of the beasts. two hostile powers lock horns in deadly combat - each determined to gain the

What is an example of a Lagomorpha? seal goat rabbit fox - What type of animal has the highest metabolism, thus the

Ch2.Sheep and Goat Management - 2.1 feeding, management, and housing of sheep . ch2.sheep and goat management. an- najah

“The Fox and The Goat” - . fox fell into a deep well and couldn’t get out. sometime later goat came by. “is the