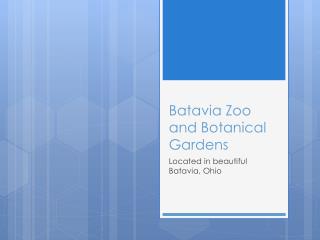 Batavia Zoo and Botanical Gardens. Located in beautiful Batavia, Ohio. Mission Statement. To provide a safe and convenient place for explorers of all ages to learn about animals currently in captivity. . Green Anaconda ( Eunect’s Myrinus ).

THE CIVIL WAR - . lincoln was born in a log cabin near hodgenville, kentucky on february 12, 1809. lincoln became a

Botanical Potluck Lab - . and an introduction to spices and herbs. read the pre-lab and then answer the pre-lab

Kratom - . by: rachel greene. what is kratom?. kratom is a tree that is native to southeast asia mostly commonly in

VEGETABLES 101 - . what’s on the agenda?. benefits of growing your own garden how to select a site different types of