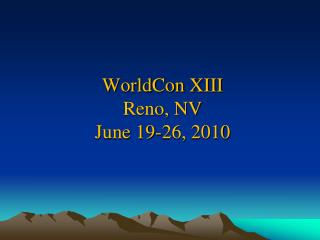 WorldCon XIII Reno, NV June 19-26, 2010. Contextual Behavioral Science and the Role of RFT. Steven C. Hayes University of Nevada. Our Society. By consensus of the group, our association is not named for ACT, or RFT, or 3 rd generation CBT