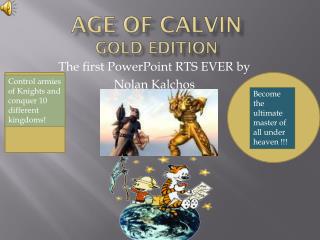 AGE OF CALVIN Gold Edition. Control armies of Knights and conquer 10 different kingdoms!. Become the ultimate master of all under heaven !!!. The first PowerPoint RTS EVER by Nolan Kalchos. Hear Ye! Hear Ye!.

Unit VI: The Renaissance, European Exploration, and the Tudors - . standard. sswh9 the student will analyze change and

JERRY SPINELLI - . jerry spinelli has written over 20 books for kids of all ages, including everybody, fiction, and

Golden Age of Justinian - . ruled from constantinople but considered himself part of the tradition of the great roman

The Persian Wars and the Golden Age - . the new army of greece. sparta was already a military state, but athens only had

PHILOSOPHY OF THE RENAISSANCE PERIOD - . plan. 1. characteristic features of renaissance. humanism and anthropocentrism.