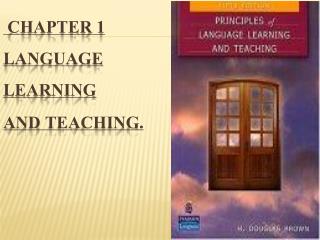 Chapter 1 Language Learning and Teaching. Current issues in second language acquisition (SLA). 1-Who? Who does the learning and teaching? Questions about learners and teachers. 2-What? - What must the leaner learn and the teacher teach? -What is communication ? -What is language? 3-How

ING303 Teaching Language Skills - . lecture 4: the task. things to do in this chapter. the language-learning task : a

Listening in Language Teaching - . tefl course on chapter 16. forewords. for many years listening skill did not receive

English Teaching Methodology - . what you should know about english teaching ?. reference books. techniques and

Welcome - . congratulations on your tawjihi success welcome to english department @iug wish you the best success in both

Teaching /Learning / ICT - . in teaching, what are the assumptions made about different forms of learning? teacher,

Chapter 3 - . understanding the teaching/learning process. chapter overview. what is learning? how do we learn?

Intercultural Language Learning - . provides a new purpose and pedagogical framework for teaching languages. is a