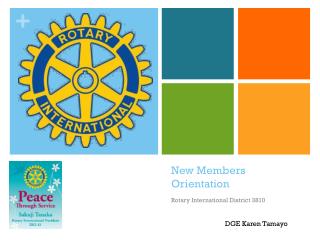 New Members Orientation. Rotary International District 3810. DGE Karen Tamayo. WELCOME TO THE WORLD OF ROTARY!. Who Are We?. 1.2 million in 32,000 clubs in the world

Handicap Primer New Member Orientation - . handicaps and how they can help you enjoy the game of golf. having a handicap

INTRODUCTION TO ICADV NEW MEMBER ORIENTATION RECORDED MODULES - . welcome to your new position a message from the

Installing a New Member - . do you remember how you felt when you joined? you have one chance to make a first impression.