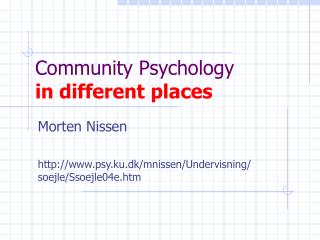 We’ve come together in Omaha … From many different places... - The importance of transplant data through the lens of

Community psychology - . rebecca, chloe and jazmin. who do they work

The Psychology of Community Management - . harnessing the social sciences for successful online communities o r how to

Acids and Bases in all Different Places - . i. properties of acids. a. molecular substances which ionize when added to

Friends Live in Different Places - . by: cara edenfield g roupbygroup.wordpress.com. all around the world, there are lots

5. Different Places, Different Houses - . learning objectives. 1. students will be able to draw and explain the house

Community Psychology - . not all psychologists believe that therapy (whatever the form) is the best intervention for

PLACES AND PEOPLE IN OUR COMMUNITY - . visual arts. http://www.gdaypubs.com.au/vic/terang.html.

How is psychology different from philosophy? - . what qualifies  research as science?. psychological research must