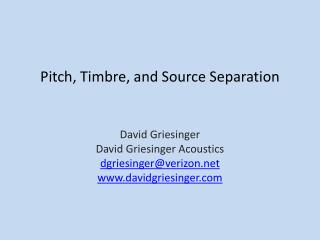 ACOUSTICS LAB - . me4053. objectives: study the propagation of sound waves from a loudspeaker and compare with a

Citing a Source from the Anthology - . levy, ariel. “women and the rise of raunch culture.” reading pop culture: a

Verizon vs. AT&amp;T War - . ray mcguinness ina kang. the past. apple and at&amp;t partnered to release the

What’s Under The Bed? Timbre - . definition: the character or quality of a musical sound or voice as distinct from its

Separation of Germany - Thorsten alexander weber. separation of germany. use while following along with the presentation

Coming Apart: Separation and Divorce - . chapter 13. chapter outline. the meaning of divorce divorce in the us factors

VOLUNTARY SEPARATION INCENTIVE PAYMENTS (BUYOUTS) - -- on may 13, 2004, the office of personnel management approved