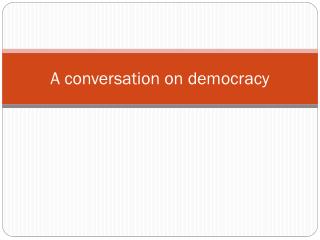 A conversation on democracy

A conversation on democracy

Democracy, “Good Governance” and (Sustainable) Development - The challenge of matching governing form to

E-electioneering and E-democracy (Government 2.0) in Australia - . studies of online citizen consultation and social

Which style of leadership should we follow and why? - . democracy (pros). it allows the people to decide what they want

Chapter 13 The Culture of Journalism: Values, Ethics, and Democracy - . kendall rice. modern journalism in the

Corporatism, Pluralism, and Democracy: Toward a Deliberative Theory of Bureaucratic Accountability. - Corporatism,

Struggles for Democracy - . journal #52. why do so many people want democracy? what rights are necessary for a government

New media and Democracy - . does the internet make any real difference to democracy? grahamyoung executive director