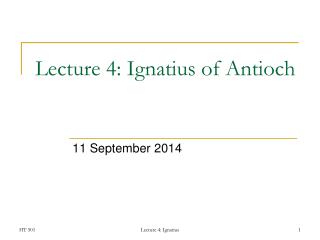 Ignatius of Loyola - . early history. born 1491 to a noble basque family at the castle of loyola, youngest of 13 children

Antioch - On the road to. antioch. acts

Ignatius of Loyola. - Ignatius of loyola. brandon troy cari. map of rome. his home base was at rome, where he did most of

● Antioch - . the church at antioch. » began from scattering of the saints » jerusalem sent barnabas to antioch »

Ignatius University of Scranton - . college of nursing curriculum 2012-2013. vision. confidence in the evidence based

Ignatius, Romans . - Ignatius, romans . according to introduction, who was ignatius? in his opening greeting, how does

The Autobiography of Ignatius Loyola - . next week. monday: witches wednesday: last class, review for the final (try not

Ignatius the Pilgrim - . a reflection for ignatian educators. consolation and desolation. why did i become an educator at