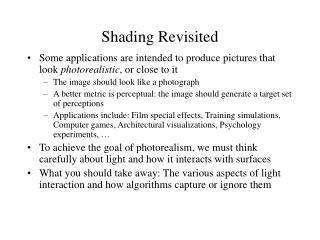 Shading Revisited. Some applications are intended to produce pictures that look photorealistic , or close to it The image should look like a photograph A better metric is perceptual: the image should generate a target set of perceptions

Shading - . adding color. lambert’s law. light a point in any direction varies as the cosine of the angle between a

Shading - Csc 2141 introduction to computer graphics. shading. circle or sphere?. why we need shading. suppose we build a

Shading Models - . every pixel interior to the polygon is assigned the same intensity. the normal at a point on the