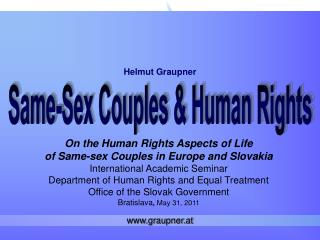 On the Human Rights Aspects of Life of Same-sex Couples in Europe and Slovakia - Helmut graupner. same-sex couples

SAME-SEX COUPLES - . a same-sex relationship can take one of many forms, from romantic and sexual, to non-romantic close

Same-Sex Couples and Families - . chapter 8 “when i was in the military they gave me a medal for killing two men and a

Civil Marriage and Same-Sex Couples - . a look at the disparity in health, disability, death, and retirement policy for

Protection of Human Rights in Europe - . the council of

Earnings Differentials of Males and Females in Same-sex and Different-sex Couples in Canada, 2006-2010 - . richard e.

Unit 23 The Protection of HumaN Rights in Europe - . preparatory exercise. do the exercise i, text book, p. 228