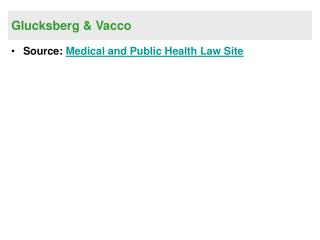 Glucksberg & Vacco. Source: Medical and Public Health Law Site. Overview. What rights does a patient have to the aid of a physician in committing suicide? Legislators and voters have considered the issue The Last Word: 14 th questions due Friday; test Monday - Frontpage: not an fp. you dropped food on the floor…should you