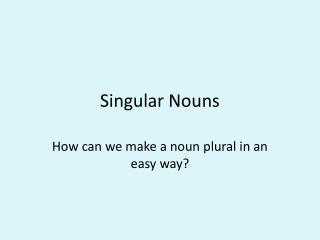 Singular Nouns. How can we make a noun plural in an easy way?. Singular Noun Definition . When a noun means one only, it is said to be singular. Examples: boy, girl, woman, man, child, Church cat lamp fork church book. How are the plurals of most nouns formed?. Singular and Plural Nouns - . singular vs. plural. a singular noun names one person, place, thing, or idea. one cat, one

Singular and Plural Nouns - . cuquis sandoval. there are 6 ways to change a noun from singular to plural. a noun is a

NOUNS - . singular / plural common / proper concrete / abstract. nouns overview. a noun is a person, a place, a thing, or

Count and Non-Count Nouns - . ms. cox 6 th grade ela. count nouns. a count noun is something we can count. it has a

Singular Possessive Nouns - . created by andrea white 2 nd grade. some nouns show who or what own something. luke’s toy

Singular Possessive Nouns - . created by andrea white 2 nd grade. some nouns show who or what own something. luke’s toy