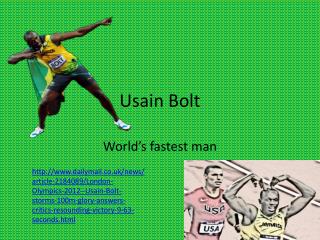 Usain Bolt is the world’s fastest man!!! - . physics of motion. we will look at: position distance displacement speed

The Roles of Libraries on the Information Highway - . by nancy bolt nancy bolt &amp; associates

James Otis - . by matthew. james otis died on may 23 rd 1783 when he got struck by a bolt of lightning. james otis birth

Striking in Hockey - . jay kitchens. hi, my name’s slider. i’ll be helping you out today. click me to begin. main

Usain Bolt is the world’s fastest man!!! - . physics of motion. we will look at: distance displacement speed first you

World War One Weapons - Bolt action rifle this rifle fired only one bullet at a time, then you were forced to reload.