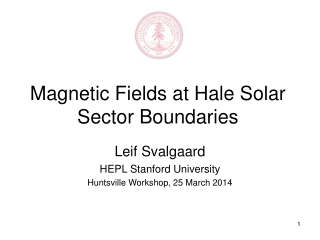 21.1 Magnets and Magnetic Fields - . we are going to learn…. a brief history of magnets how magnetic poles interact how

What Would a Solar Magnetic Flip Do To The Climate? - While united nations officials fret about manmade global warming,

Magnets and Magnetic Fields - . ch 21.1. magnetic forces. the force a magnet exerts on another magnet iron or similar

Topic 6: Fields and forces 6.3 Magnetic force and field - . 6.3.1 state that moving charges give rise to magnetic

A new technique of detection and inversion of magnetic fields in stars: PCA-ZDI - . julio ramirez velez meir semel. the