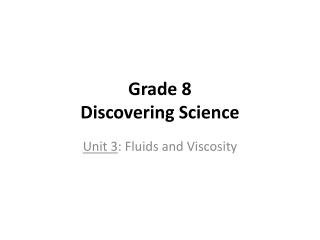 Grade 8 Discovering Science. Unit 3 : Fluids and Viscosity. Chapter 7. Viscosity describes a fluid’s resistance to flow. QUESTIONS. Why do some fluids seem to hold their shape longer? Why do some fluids take up more space than other fluids at different t temperatures? Grade 8 Science - . unit 1:. water systems on earth. chapter 3. heat capacity.  a measure of how long it takes a

Grade 8 Science - . kyle rosbrook. outcome ws8.2 examine how wind, water, and ice have shaped and continue to shape the

Grade 8 Science - . unit i: water systems on earth chapter 3: this chapter is all about ocean currents and how they