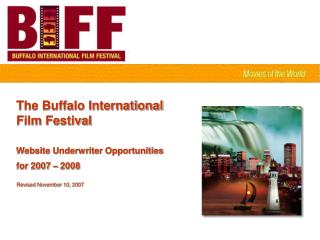 WIFF ( Westcreek International Film Festival) - . get a wiff of

The Film Festival - . http://www.fsproducingclass.com/fpm3/. the film festival. before submitting your film to a

FILM FESTIVAL - . filmmaking workshop on may 22. dahome abdulrham and josef gave a presentation in english on: how to get

International Film and Food Festival (I.F.F.F) - . by alyce hanna. about the festival. - the theme of i.f.f.f. is

Independent Film Festival - The way that you've come this far demonstrates your energy and addresses your desire; you

Film Festival Deliverables - . running a festival or submitting to a festival.. what you need to know. what is covered.