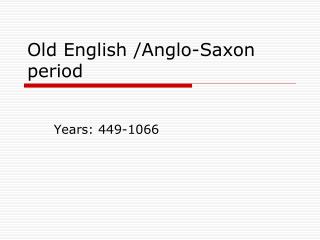 THE ANGLO SAXON PERIOD - . 449-1066. the beginning. the arrival of the anglo saxons in britain signaled the beginning of

Anglo-Saxon England - . period from the end of roman occupation in the 5 th century until the norman conquest of england

Anglo-Saxon Background - . a prelude to beowulf. history. the anglo saxon period is the oldest known period of time that