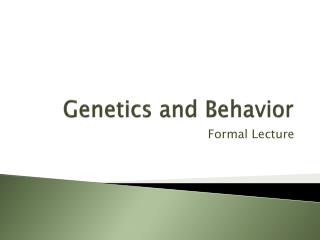 BEHAVIOR GENETICS - . “thanks for almost everything, dad”. genetics – study of how living things pass on traits

BEHAVIOR GENETICS - . “thanks for almost everything, dad”. genetics – study of how living things pass on traits

Genetics, Environment, and Behavior - . how do they interact?. identical twins reared apart. elyse schein and paula

Genetics, anatomy and biochemistry of behavior - . there is a genetic component to the etiology of various psychiatric

Chapter 2 Lecture Notes and Behavior Genetics - . meiosis. meiosis: this is division of the germ cells (i.e., the male or

The History of Behavior Genetics - . how nature affects our genetics and how our genetics change how we perceive and

Genetics and - . society. give an example of a plant and an animal where a characteristic has been enhanced by selective

2.2 To what extent does genetics influence behavior? - . back up your response with research. behavioral genetics.