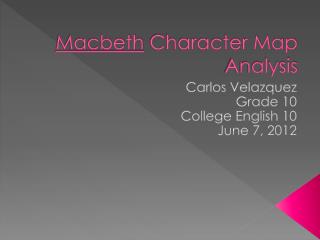 Analyzing Quotes from Macbeth - . pee practice. giving evidence. it is crucial that you pee in your writing to make it as

Introduction to Macbeth - . najma rahmani, senior english. the plot of macbeth. the play is the story of a man, macbeth,

Introduction to Macbeth - . background information. shakespeare wrote the tragedy of macbeth around 1606, shortly after

Character Analysis - Adventurous. character analysis. when you read a story, think about the characters as if they were

Lady Macbeth - . come you spirits/that tend on mortal thoughts, unsex me here, and fill me from the crown to the toe top

LADY MACBETH - . power hungry. manipulative. how now, my lord, why do you keep alone, of sorriest fancies your companions

Introduction to Macbeth - . ms. phillips eng2p. the basic story . macbeth is a story about a noble man named macbeth who