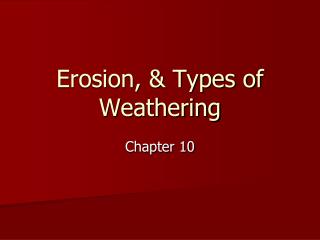 Erosion, & Types of Weathering. Chapter 10. Erosion. A process where water, wind, or gravity transports soil (sediment) from its source. The process by which rocks are broken down into smaller pieces There are 2 main types, chemical & Physical. Weathering. Mechanical Weathering. Weathering and Soil Formation - . weathering. the breaking down of rocks and other materials on the earth’s surface is