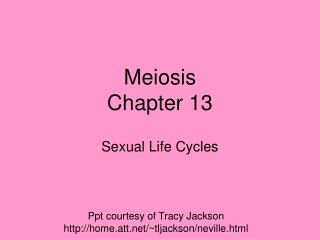 Meiosis Chapter 13. Sexual Life Cycles. Ppt courtesy of Tracy Jackson http://home.att.net/~tljackson/neville.html. Introduction to Heredity. Heredity is the transmission of traits from one generation to the next. Variation – differences in characteristics seen in parents and offspring. CHAPTER 13 MEIOSIS AND SEXUAL LIFE CYCLES - . heredity- the transmission of traits from one generation to the next, also

Chapter 13: Meiosis and Sexual Life Cycle - . background. the passage of genetic information is critical to the

Chapter 13: Meiosis &amp; Sexual Life Cycles - . what you must know. the difference between asexual and sexual

Chapter 12 MEIOSIS - Meiosis. a type of nuclear divisionmeiosis is also called reduction division because it results in

Chapter 8: Meiosis - . production of sex cells. introduction. mitosis and meiosis are somewhat similar, but have 2

Meiosis Chapter 6 - . mitosis vs meiosis. page 161 in the textbook. introduction to meiosis. chromosomes and