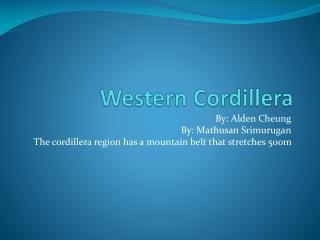 Taiga Cordillera - . luke sirna. the taiga cordillera is located along the northwest territories/ yukon border and

Arctic Cordillera - . by: john li and raymond hao. map of arctic cordillera. there are many ice caps and mountain peaks

Cordillera Administrative Region(CAR) - . it is located in the northern part of luzon in the cordillera mountain ranges.

By Rosa Cordillera A. Castillo - Anthropology and mining: ethical issues in conducting social impact studies among

CANADA’S LANDFORM REGIONS - . canada’s landform regions. canada is made up of 3 distinct types of landforms: shield

Canada’s Landform Regions - . canada's landform regions. canada can be divided up based on its physical geography, much