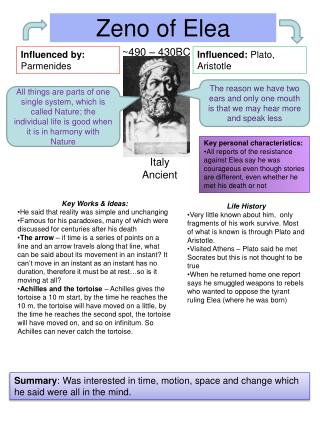 Zeno of Elea. ~490 – 430BC. Influenced by: Parmenides. Influenced: Plato, Aristotle. The reason we have two ears and only one mouth is that we may hear more and speak less. Zeno - . on change. zeno. zeno. the dichotomy. zeno’s arguments about motion which provide trouble for those who try to

Zeno - . the philosopher. zeno of elea was a greek philosopher lived in the greek colony of elea in italy alive from

The Eleatics : Parmenides &amp; Zeno - . confronts the paradoxes that follow from heraclitus and pythagoreans.

Greek Philosophers - . what is philosophy?. means “love of wisdom” the rational investigation of the truths and

Limit - . zeno of elea. 490bc–?. tangent problem. velocity problem. examples 1 and 3 show that in order to solve

Mathematical Ideas that Shaped the World - . calculus. plan for this class . what were zeno’s paradoxes? what happens