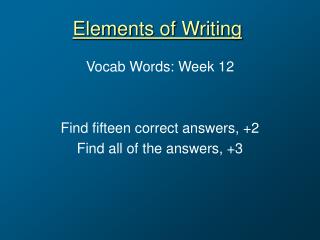 Naming Compounds and Writing Formulas - . metals and nonmetals. for nomenclature purposes, metals are to the left of the

Property Elements - . in this section we will look at the different property elements and how to identify and assess

A Short Guide to Writing About Film - Chapter 2 beginning to think, watch, and write what are you going to analyze?