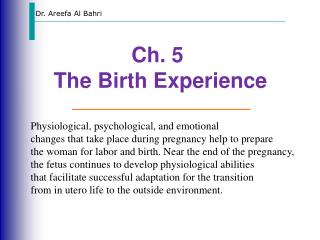 Dr. Areefa Al Bahri. Ch. 5 The Birth Experience. Physiological, psychological, and emotional changes that take place during pregnancy help to prepare the woman for labor and birth. Near the end of the pregnancy, the fetus continues to develop physiological abilities

Medbh McGuckian - . (http://english.emory.edu/bahri/mcguckian.html). “i don’t think anyone can really be irish in

Rule During the New Kingdom - . by justine coleman and dina ninan. deir el-bahri,

The Olympians – in order of importance/birth:

Ephraim Amu: birth and first education - . ephraim amu was born on 13th september, 1899, in the village of peki-avetile

Birth Defects - . dr rania gabr. objectives. by the end of this lecture, the student should be able to: 1- define birth

The Birth of Shaka - . oswald joseph mtshali. the life of shaka. mother was nandi born fatherless 1816 became leader half

2008 Physiological Measurements - . focusing on measurements that assess the function of the major body systems. the nine