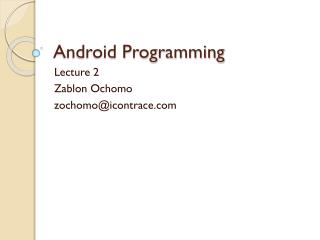 Android programming - I-softinc is one of the most development company for developing mobile apps development in india.

Programming in android - . ioannis (john) papavasileiou march 31 2014 papabasile@engr.uconn.edu. what is it. software

Android Programming Succinctly - From creating a ui to adding widgets and embedding fragments are covered. and he

Advanced Android Programming - . george nychis srinivasan seshan. a recap of last lecture. use these lectures as a

Programming in Android - . outline. what you get from android an android application is a loosely-coupled software system