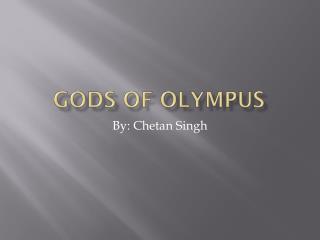 The Gods of Olympus - . the greek gods. twelve major gods in ancient greece they looked like humans and acted like humans

THE GODS OF OLYMPUS - . after the battle of the titans the world divided into three parts, between the three brothers,

THE LESSER GODS OF OLYMPUS - . eros hebe iris the graces the muses. eros (cupid). greek god of love and sexual desire a n

Greek Gods on Mt. Olympus - . what is the roman name for zeus? what about domain/powers?. what is the greek name for

The Gods and Goddesses of Mount Olympus

Greek Gods &amp; Goddesses of Mt. Olympus - . zeus (jove or jupiter). ruler of all gods and men sky god lord of the

The Lesser Gods of Olympus &amp; Earth - . english i. eros. cupid god of love son of aphrodite married to psyche.

Dei Romani The gods and goddesses of Olympus - . olympic gods. iuppiter omnipotens. jupiter was the king of gods and

Olympus Programme - . project planning identifying scope of work 9 november 2011. aims and objectives. the aim of this