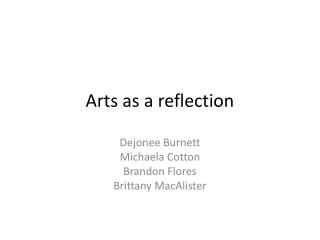 Arts as a reflection. Dejonee Burnett Michaela Cotton Brandon Flores Brittany MacAlister. What is Art?. The expression or application of human creative skill and imagination It is typically in a visual form Examples: - painting or sculpture Language Arts Reflection - . by: sarah camisa. all about me. the first project we did this year was to complete a poster

Revision as Reflection and Dialogue - . tika lamsal. peer review as a social practice. according to joseph harris,

Art History as a Reflection of Ourselves Explored - . k. miller bhs art dept. who says that finger-painting isn’t

Jane Eyre as a Reflection of the Times - . by: rishabh jain, erik loewen , sagar mulchandani, angelene superable , and

The Arts as a mode of knowing - . dr. elizabeth grierson. the paper engages with unesco’s defining notion that ‘the

Culinary Arts as a Career | CHEF IBCA - Better believe it, it is now known as an art and several young people are

A Portfolio Reflection - My journey as a doctoral student: the road less travelled. robert frost eloquently stated a

Digital Reflection: A method for practice-led research in the arts? - . carole kirk, school of performance and cultural

Understanding Practice: Video as a Medium for Reflection and Design - Lucy a. suchman and randall h. trigg design at