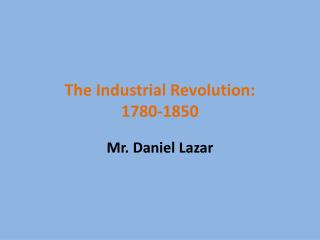 Cities and the Industrial Revolution - . the rapid growth of cities caused a large _____shortage. housing. the sudden

INDUSTRIAL REVOLUTION - . 5-3 the student will demonstrate an understanding of major domestic and foreign developments

Lecture 2 The Industrial Revolution Was There One? Se Yan - . introduction. what actually happened 1750 and 1850 in