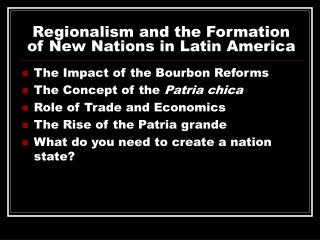 Regionalism and the Formation of New Nations in Latin America Regionalism and the Formation of New Nations in Latin America. The Impact of the Bourbon Reforms The Concept of the Patria chica Role of Trade and Economics The Rise of the Patria grande What do you need to create a nation state?. Bourbon Reforms. 1782 Intendancy system created

Regionalism and the Formation of New Nations in Latin America

Nation Building and Economic Transformation in the Americas, 1800-1890 - . chapter 23. independence in latin america.

MULTINATIONALISM and the CHANGING POLITICAL LANDSCAPE - . devolution. the movement of power from the central government

Latin American Independence - . 1808-1825. 4 outside events that prompted it:. enlightenment ideas of liberalism spread

The Foundation of Regional Governance and Regulatory Regionalism in East Asia - . professor he baogang, public policy and

CHAPTER 23 Nation Building and Economic Transformation in the Americas, 1800–1890 - . i. independence in latin america,

World History: The Earth and its Peoples - . chapter 23 nation building and economic transformation in the americas,

Chilean History - . how can atrocities happen even in stable democracies? world history 2, session 7. where is chile?.

Language and Nationalism in Europe, chapter 2 - . britain &amp; ireland: the varying significance of language for

LATIN AMERICAN REVOLUTIONS - . “it takes a revolution…. to make a solution….” - bob marley. what were the