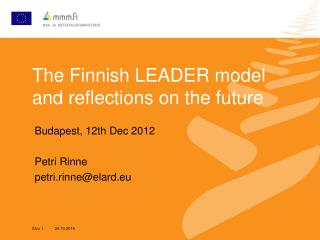 The Finnish LEADER model and reflections on the future The Finnish LEADER model and reflections on the future

Servant Leadership - . so many people are suffering for want of good leader throughout the whole world. morning talk --

The Rise and Fall of Finnish Language-Education Policy: A Blueprint How to Bring about a Crisis - . sauli takala who

Light waves - . can light bounce?. yes! we call this a reflection. humans have been looking at reflections for thousands

The Bear as a Russian National and Militarist Symbol The Bear and the Finnish Maiden - . vesa matteo piludu 2009.

Reflections on the Semester - . feraco myth to science fiction 22 january

Through the Looking Glass: Reflections of a Research Ethicist or The Collapse of Science and Ethics? - . michael goodyear

Illinois Family Farms Rick E. Rosentreter - 4 topics . what is our outlook on the future of production

Starbucks - . back to the basics. promotional strategy . what model does starbucks use? push model pull model current

What is a CGE Model? - . miles k. light, ph.d. university of colorado armenian ministry of economy and trade yerevan,

Servant Leadership - So many people are suffering for want of good leader throughout the whole world. morning talk --