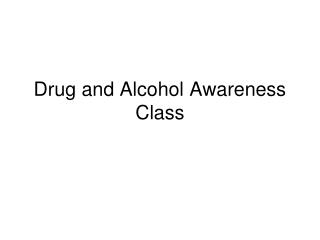 Drug and Alcohol Awareness Class. Outline for Training. Impact of Drug/Alcohol Abuse on Society and Industry A. National and Regional Statistics on Prohibited Drug/Alcohol Use B. How Drug Use Affects Industry Safety Personal Health Work Environment Reasonable Suspicion Training for Drug and Alcohol Use - . presented by: t.e.a.m., inc. what we will talk about today.

Update on Alcohol, Other Drugs, and Health - . november–december 2010. studies on interventions &amp; assessments.