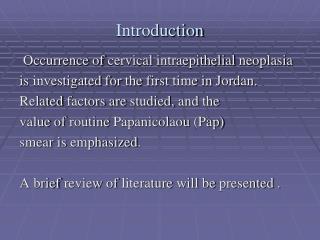 Introduction. Occurrence of cervical intraepithelial neoplasia is investigated for the first time in Jordan. Related factors are studied, and the value of routine Papanicolaou (Pap) smear is emphasized. A brief review of literature will be presented. Materials and Methods.