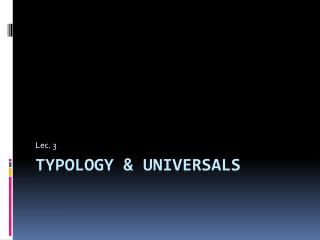 Typology - . a system of classification, in this case, based on forms of human society. ethnocentrism. t he opinion that

PEW Typology - Based on your pew typology quiz results, split into these groups . discuss for 3 – 5 minutes among your

Typology - . impacts and plan. background. ec has a set of rules about how to ( i ) value activity and (ii) allocate a

MORPHOLOGICAL TYPOLOGY - . presented by nazlı ebrİŞİm. grammatical expressions of meaning. the distinction of