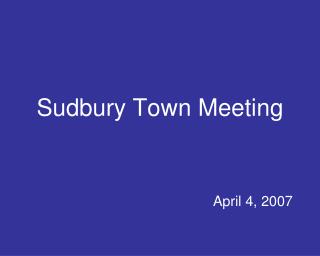 W A R R A N T ANNUAL TOWN MEETING TOWN OF WAREHAM October 25, 2010 - . the wareham board of selectmen is looking for

Bob Tavares RF Director Sudbury, MA - . partnership for excellence. our vision for our relationship with raytheon. we

DEVELOPING A CONVENTION CENTRE IN GREATER SUDBURY Overview of Market Support and Community Impacts - . prepared for: the

Neutrino Pre-Town Meeting This is a town meeting: make your voice heard! - . what we hope to do at the breakout sessions

The Eighth Deadliest Tornado in Canadian History! - . sudbury, ontario - 20 august, 1970. in the northern town of