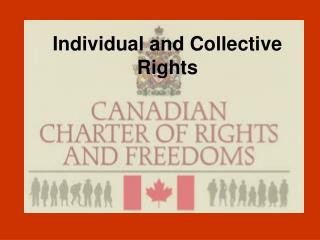 Individual and Collective Rights. Why Charter of Rights and Freedoms?. Canada’s constitution Reasonable limitation on government and individual freedoms Based on the values “we” hold as a society Ensures certain basic rights of every Canadian citizen and permanent resident. Our Rights.

The Individual and the Group - . philosophers and social scientists have long pondered “the master problem” of social

Chapter 3 Review Canada’s Charter of Rights and Freedoms - . vocabulary!!. constitution -. a special set of laws that

RIGHTS, DUTIES, PRIVILIGES - . the declaration of the rights of man and of the citizen is one of the fundamental

Chapter 4 - Collective rights in canada. chapter 4. your identity as an individual describes who you are. this identity

What Collective Rights do Official Language Groups have under the Charter? - . what are the collective rights of

How Does the Charter Protect Individual rights and Freedoms? - . in this chapter…. we will inspect the canadian charter

THE IMPACT OF THE INDIAN ACT ON COLLECTIVE RIGHTS - Chapter 4: to what extent has canada affirmed collective rights?.

What laws recognize the collective rights of First Nations peoples? - . to what extent has canada affirmed collective

Metis Collective Rights in Canada - . the metis are recognized as one of canada’s aboriginal peoples in the

Chapter 3: How effectively does Canada’s Charter of Rights and Freedoms protect your individual rights? - . part i: how

Complexities of Liberalism in Practice Chapter Eleven - . read page 368 . to what extent do you think the actions of the