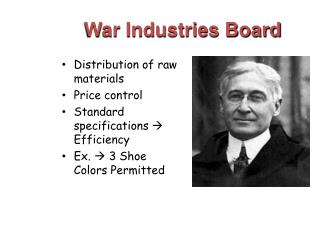 War Industries Board - . created july, 1917 to determine what materials manufacturers could use and what they could or

NSA for Process Industries. Shadow Board

The War Production Board (WPB) - . director james f. byrnes banned using materials at home that were needed for the war

Origins Board &amp; War Room 2008 - . we together complete the gaming picture. origins board room 2008. join us and

Serving the Printed Circuit Board and Electronics Assembly Industries - . an overview. overview of ipc. background and

VR Industries - V.r. industries pvt. ltd is an iso 22000 certified company established in 1986. we are known to produce,