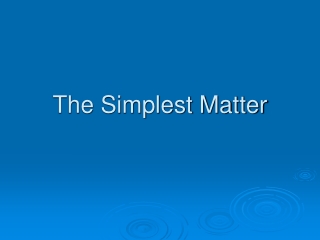 The Simplest Matter. TV sets are common, yet each one is a complex system. All of the different materials have one thing in common. They are made up of even simpler materials. One Kind of Atom. Matter - . “luminous beings are we, not this crude matter!” -yoda, on the nature of the force. matter. any

Matter Matters - . matter, matter everywhere except in a vacuum of course chemistry is the study of matter its changes

Chapter 2 The Chemical Basis of Life - 2. basic chemistry. matter, mass, and weightmatter: anything that occupies space

Matter &amp; The Atom - . matter. the term matter describes all of the physical substances around us matter is

Matter and Measurement - . earth science intro unit. i will be able to define matter and describe how the properties of

The Cycles of Matter - . why and how is matter recycled in our ecosystem?. cycles of matter. all things in nature are

Matter &amp; Properties of Matter - . matter. anything that has mass and takes-up space the quantity of matter

Classification of Matter - . what is matter and how do we as scientists categorize it?. matter. pure substances.

What’s the Matter? - . the matter is everything!! states of matter; solids, liquids, gases classifying matter according

What’s the Matter? - . the basics. what is chemistry? what is matter? how do we measure matter? mass = qty of matter in

Matter and more - . matter, atoms, and the periodic table. in this unit. properties of matter p hysical/chemical

What’s a Matter? - . what is matter?. matter : anything that takes up space and has mass atom : basic unit of matter

Classifying Matter - . up to this point, we have only been modeling matter with simple particles the simplest units of

Matter - . what is it?. matter. matter is anything that takes up space!! ! matter is everything around you. matter is

CHAPTER 2 CHEMISTRY OF LIFE - . cpi tyska holliston hs. section 2-1 the nature of matter. atoms. an atom is the simplest

Matter - . mrs. horn 5 th grade science 2 nd nine weeks. what is matter?. matter is all around you matter is anything

Properties of Matter - . matter . anything that has mass and takes up space matter can take many forms and is not always