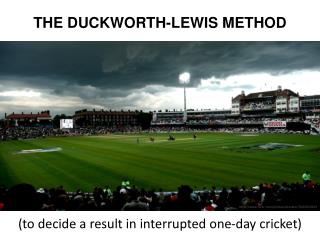 THE DUCKWORTH-LEWIS METHOD. (to decide a result in interrupted one-day cricket). http://www.flickr.com/photos/elkinator/3624920915. ONE-DAY CRICKET. Match restricted to one day Fixed number, N , overs for each team Draw is unacceptable if match is not finished THE PROBLEM A SECOND LOOK AT DUCKWORTH-LEWIS IN TWENTY20 CRICKET - . harsha perera department of statistics and actuarial science

“The Method” - . an introduction to stanislavski. what is good acting?. every age/culture has an idea of what

The Method - . step 1. relaxation. relaxation is the foundation upon which rests the &quot;house of

The Significance of Grit: A Conversation with Angela Lee Duckworth - . article study: step one. read article

C.S. Lewis - . “there is, to be sure, one glaringly obvious ground for denying that any moral purpose at all is