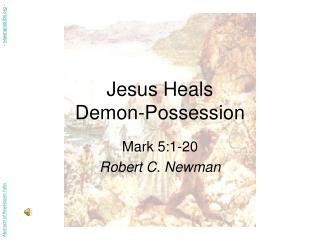 2 nd GALILEAN TOUR - . preaching about the kingdom. luke 8:1-3 now it came to pass, afterward, that he went through

The New Testament - . the gospels. matthew. the apostle matthew, until recent times was, the only person considered to be

Christians &amp; Demons - . part i the spiritual war within. “for our struggle is not against flesh and blood, but