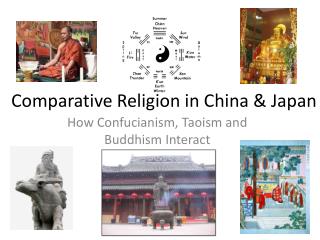 Comparative Religion in China & Japan. How Confucianism, Taoism and Buddhism Interact. Contrasting Worldviews: Taoism vs Confucianism . Romanticism : trust your heart, not your head. Reason sometimes allows us to mislead ourselves and betray our innermost desires

Culture,Economt,Politics,Language,Population in China - China is a populous nation in east asia whose vast landscape

Religion in China - . adapted from http://www.sacu.org/religion.html. introduction. chinese are not deeply religious.

Chinese Religions - . a brief look at confucianism and taoism. most chinese religions: focus on the role of ancestors and

Religion in China - . religion and the martial arts. yin and yang. polar opposites are interconnected and interdependent

Religion in China - . what role does it play in education?. currently there are four major religions in china. buddhism

Chinese Religions - . copy the information from the slides. confucianism. based on the teaching of kong fu zi, who was