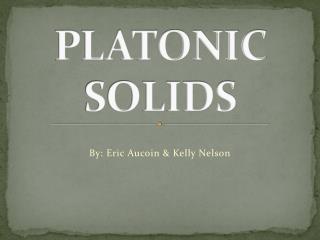 PLATONIC SOLIDS . By: Eric Aucoin & Kelly Nelson. The man behind the math. Platonic Solids - . mrs. king. image from: http://www.learner.org/interactives/geometry/platonic.html. what is a platonic

Platonic Solids - . -describe these objects-. what are some things that you notice? have you ever seen anything like

Symmetry in Platonic Solids - . polyhedra. a polyhedron is a solid figure bounded by flat faces and straight edges, i.e.,

PLATONIC SOLIDS AND EINSTEIN THEORY OF GRAVITY: - . unexpected connections. « if you plan to make a voyage of

Platonic Conception - . who is the perfect you? chapter 6 of the great

Platonic Conception of Reality - . can we be whatever we want to be? . survey. answer the questions on the survey using

SOLIDS - Group b solids having base of some shape. and just a point as a top, called apex. solids. to understand and