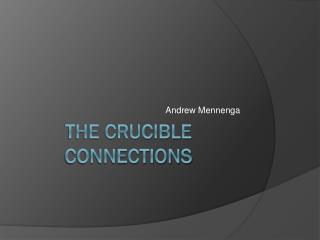 The Crucible Connections - . by: marissa rae sines. scapegoat. the crucible. abby used mary warren as a scapegoat to help

The Crucible and McCarthyism - . bell work: please get out your notebook. we will be taking several notes today in class.

The Crucible - . quotes by hale. mister, i have myself examined tituba, sarah good, and numerous others that have

Arthur Miller: Connections to the Past - . mr. miller himself. mr. miller recently passed away at the age of 89 on

The Crucible - . revision. context. 1692 salem, massachusetts strange sickness and hallucinations of some girls lead to

The Crucible - . crucible (noun): a container made of a substance that can resist great heat, for melting, fusing, or

McCarthyism - . encountering conflict. mccarthyism in a nut shell…. mccarthyism specifically refers to a period of time

“The Crucible” - . act i - review. character chart . you should have all character descriptions and motivations

Why Arthur Miller wrote “The Crucible”