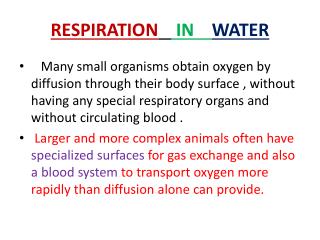 RESPIRATION IN WATER. Many small organisms obtain oxygen by diffusion through their body surface , without having any special respiratory organs and without circulating blood .

Respiration - . involves both the respiratory _ four processes that supply the body with o 2 and _. respiration.