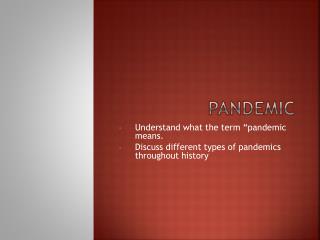 Pandemic. Understand what the term “pandemic means. Discuss different types of pandemics throughout history. Pandemic . Definition: An epidemic of infectious disease that is spreading through human populations across a large region Examples: Smallpox HIV H1N1 Flu

Pandemic - . why a global influenza pandemic is not a cause for concern. ted espenschied. background. influenza.

PANDEMIC - . brainstorming questions. in your group, discuss the following questions: how dangerous is the flu? how do

Pandemic Planning: - . community working together get informed / be prepared. objectives. review of influenza virus and

PANDEMIC RISK - . the emergence of a new virus strain with no circulating immunity within the human population the

Pandemic Preparedness - . considering the needs of employees with disabilities during a pandemic flu outbreak job

Pandemic Influenza - . are you ready?. i had a little bird its name was enza i opened the window and in-flu-enza - 1918