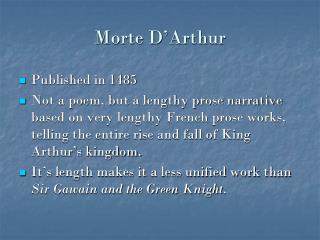 Morte D’Arthur. Published in 1485 Not a poem, but a lengthy prose narrative based on very lengthy French prose works, telling the entire rise and fall of King Arthur’s kingdom. It’s length makes it a less unified work than Sir Gawain and the Green Knight. Morte D’Arthur. Q - . 12. chapter. contingency theories of leadership. “ it is a capital mistake to theorize before one has data .”