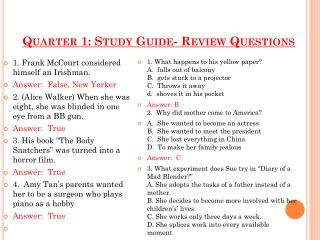 Quarter 1: Study Guide- Review Questions. 1. Frank McCourt considered himself an Irishman. Answer: False, New Yorker 2. (Alice Walker) When she was eight, she was blinded in one eye from a BB gun. Answer: True 3. His book “The Body Snatchers” was turned into a horror film.

Boost Your Bust - Https://www.breastenlargement.name/boostyourbust-review/ boost your bust is showing effective

Commercial Table Size and Height Guide - Https://superiorseating.com/ you can find tables in all shapes and sized