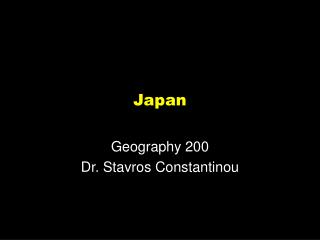 Japan. Geography 200 Dr. Stavros Constantinou . Japan: Location and Size. Japan is located off the eastern shores of Eurasia. It is an archipelago, an expanse of water with many scattered islands, extending more than 2,790 km. (1,744 mi.) from NE to SW in the Pacific Ocean.